The Bue Marino cave is located at the centre of the Gulf of Orosei, and it has been a popular destination for thousands of tourists since the 1950s. Bue Marino [Sea Ox] is the Sardinian translation of Monk Seal which, until the mid-1970s, used to shelter in this cave. It comprises three branches: The mid branch, the north branch and the south branch, and only the last two are open to visitors. The north branch is made up of large fossil galleries which display on the walls signs of the much higher ancient sea level, here you can see the three lakes: Emerald lake, Abyss lake and Black lake. The south branch, 2800 metres long, is characterised by huge tunnels of white sand, separated by fresh water lakes and along the route you find the Candelabra room, the Room of Mirrors and Seal beach.

The cave was clearly used in prehistoric times probably when the sea level was several metres below today’s level, allowing access to the land. The particular incisions in the rock and the archaeological traces all confirm that it was used during the Late Neolithic period.

During the Neolithic water was of vital importance for agriculture and navigation, the latter’s importance shown by the circulation of obsidian and the presence of early Neolithic sites near easy landings places.

One example of this could be the Bue Marino cave, (and still on the east coast, the Pope’s cave on Tavolara island) where reference to water – sea – can be found in some symbolic representations.

These are figures hammered into the rock at the entrance to the South branch, where about 20 anthropomorphic figures can be made out, as well as a cup mark and two circles with a small cup mark in the centre.

Unfortunately they are very difficult to see due to the rough limestone surface and the erosive actions of the salt.

These figures have what is known as a “double fork” shape, i.e. with arms and legs bent into a U. Focusing on the scene we can point out the isolated figure at the bottom right which like a candelabra has multiple limbs: two figures just above have extra limbs;  the last figure at the top of the main group has its legs bent in a U shape in the same direction as the arms; they all have quite long inclined and arched limbs which are spread around the three concentric motifs. According to the most likely suggestion the scene depicts worshiping men arranged around a circle interpreted as a solar motif.

In 1955 Giovanni Lilliu removed the last remaining strip of the filling in the Bue Marino cave, found in the passageway between the so- called White Lady room and the Emerald lake. This strip of earth – all that remained after the modern reorganisation of the cave – was part of the cave’s original archaeological deposit. Here was found a green stone smoother, fragments of rough pottery and the remains of a fireplace with animal bones, ash and charcoal.

The chronology is not clear: on the basis of such a small amount of material from an unclear stratigraphic context, the date can be fixed to the Late Neolithic (Ozieri culture) or the start of the Copper Age (Abealzu-Filigosa culture); giving weight to the latter chronology are the incised motifs on the loom weight from Conca Illonis – Cabras, dated to the same time period.

No evidence of human presence has been found in the north branch.

In conclusion, it is likely that the caves and shelters were mainly used for living and also had a magical-religious function, perhaps connected to funerary rites, as in contemporary hypogenic art. But to strengthen this hypothesis, we need documentary evidence of a funerary use, which is difficult to find in this context. 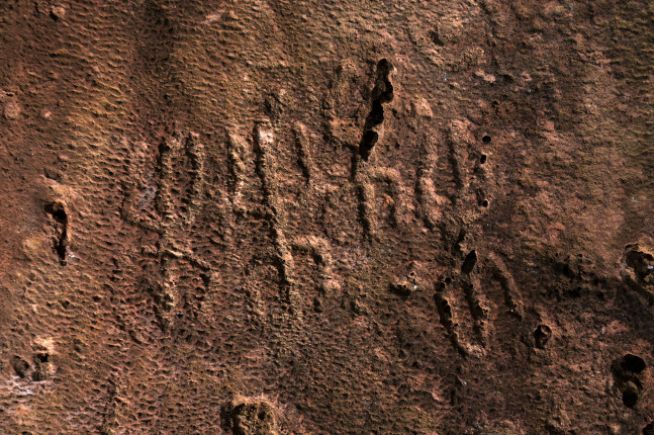 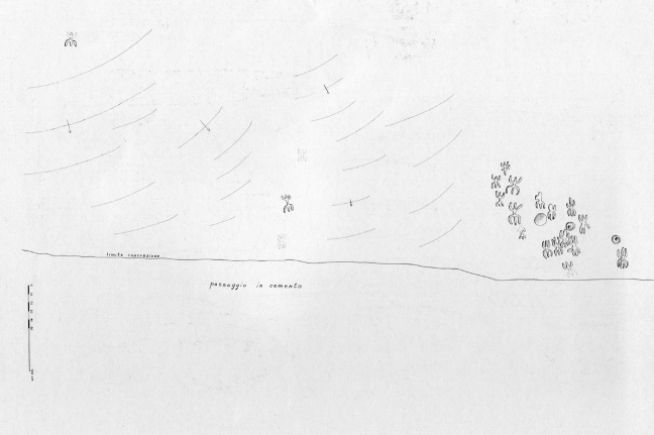